The Pride of Exmouth, a rosebud pelargonium, was given to Ursula Key-Davies for safe keeping in the National Collection at the National Geranium and Pelargonium show held at RHS Rosemoor on 17th June. Carol Rowe, from Exmouth in Bloom, who grows the plants from cuttings, is seen with April Marjoram, at the presentation.

April, who is a member of the Exmouth Local History Group discovered after contacting Derek Lee, archivist for the National Pelargonium and Geranium Society, that the Collection did not have a Pride of Exmouth.  There is a record which says that The Pride of Exmouth was raised by Mrs Hitchen of Salterton Road and first shown at the Geranium and Pelargonium show held at Kew Gardens in 1926. 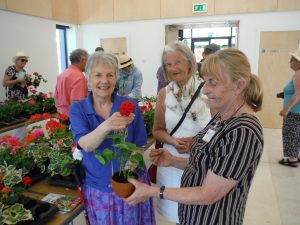