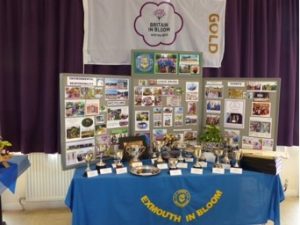 Thursday October 12th was a big day for Exmouth in Bloom when we celebrated both regional and local successes with 90 guests attending the Presentation evening at Exmouth Rugby Club.
The Evening began with a Powerpoint presentation of the work of Exmouth in Bloom and was followed by the nine recipients of RHS Britain in Bloom “It’s Your Neighbourhood” Groups being congratulated and presented with certificates by the Mayor of Exmouth, Brian Cole.
After a super buffet supper, provided and prepared by Bloom volunteers, the local competition winners were awarded tokens, generously donated by St Bridget Nurseries, Otter Garden Centre and Kings Garden and Leisure, along with trophies and certificates. Exmouth in Bloom are enormously grateful for their support.
On behalf of Exmouth in Bloom, Chairman Gerry Bassett would like to thank all the prize winners and guests for attending, especially Mayor Brian Cole, Deputy Mayor Jeff Trail, Councillors Jill Elson, Lyn Elson and Cherry Nicholas and Nick Christo from EDDC Streetscene.
She added that this year had seen an increase in the number of entries but is hoping for even more next year.

Congratulations to all Garden Competition Winners and runners-up: