Exmouth in Bloom have 9 flower-filled boats throughout the town. 7 are sited in Marine Way, 1 in The Strand and 1 at the T-junction of Hulham Road and Dinan Way.

The boats, planted up in Spring and Autumn, have all been donated, as redundant, leaking or unwanted and all but one are named after past RNLI Exmouth Lifeboats. The exception, outside the Station, is proudly named after Exmouth in Bloom’s President, Pat Graham MBE, who was was also Mayor of Exmouth. We hope that seeing the boats here that you will take the time to find them all and maybe also research the lifeboats that they are named after.

Maria Noble,  is sandwiched between two Blue towers at the junction of Exeter Road and Marine Way. Children from a nearby Nursery like to come to help us plant in the Spring. 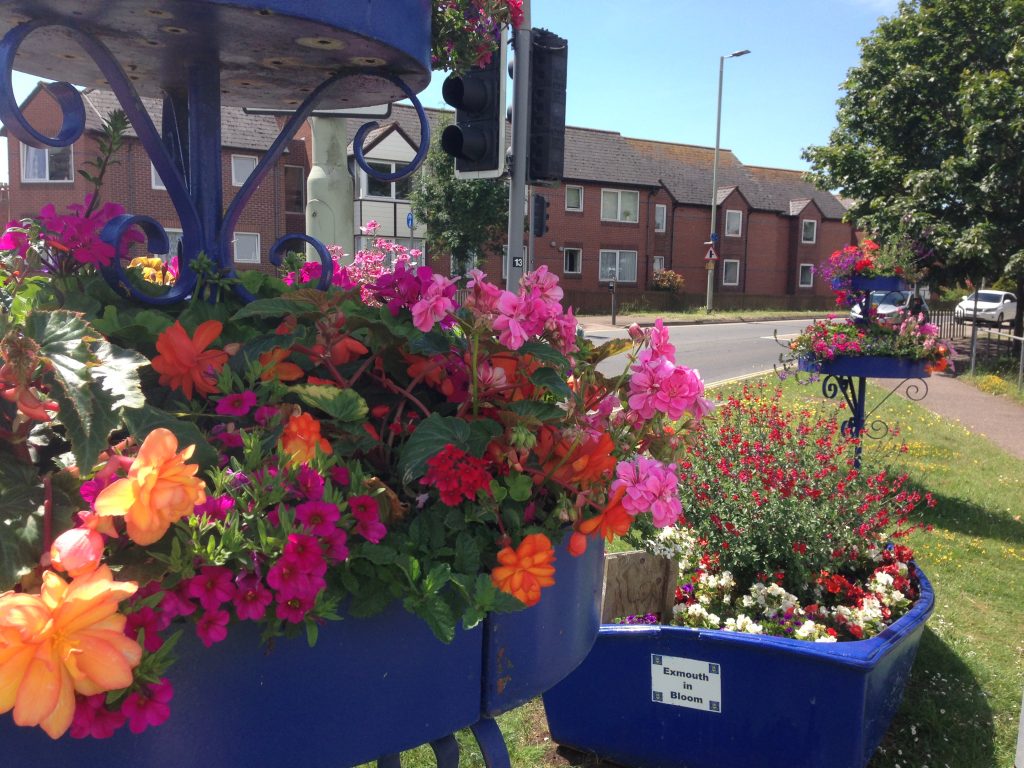 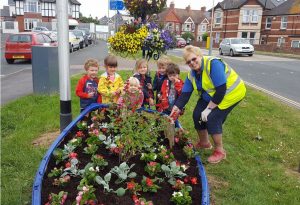 Victoria (sponsored by Exmouth Rotary Club) is near to the junction with Southern Road. Children from another Nursery have also helped to plant here. 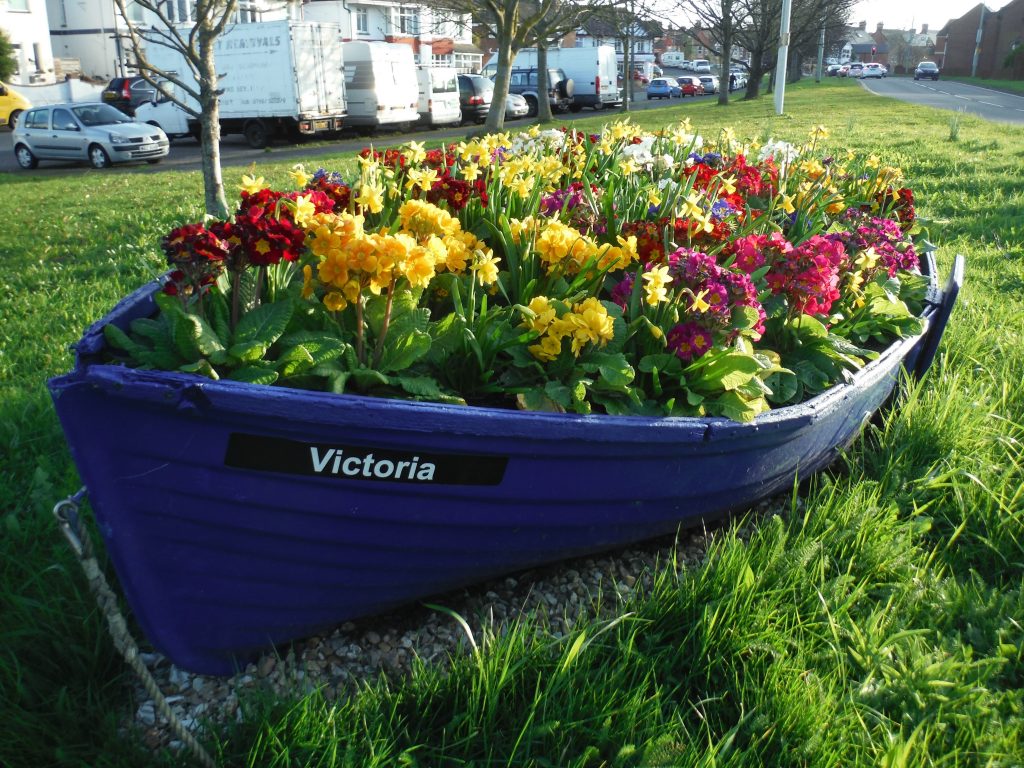 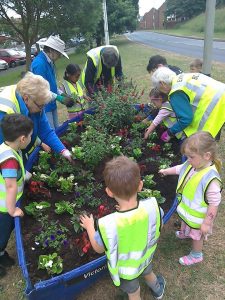 Caroline Finch (sponsored by Exmouth Rotary Club) sits near to the start of the cycle path and has wild flowers for company in Spring. 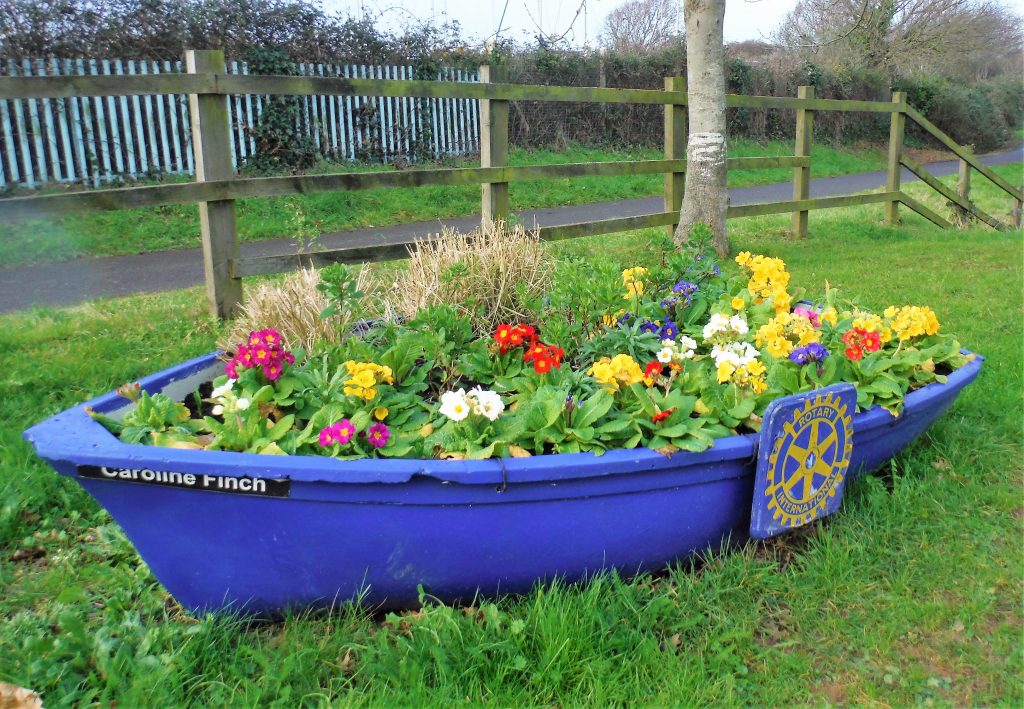 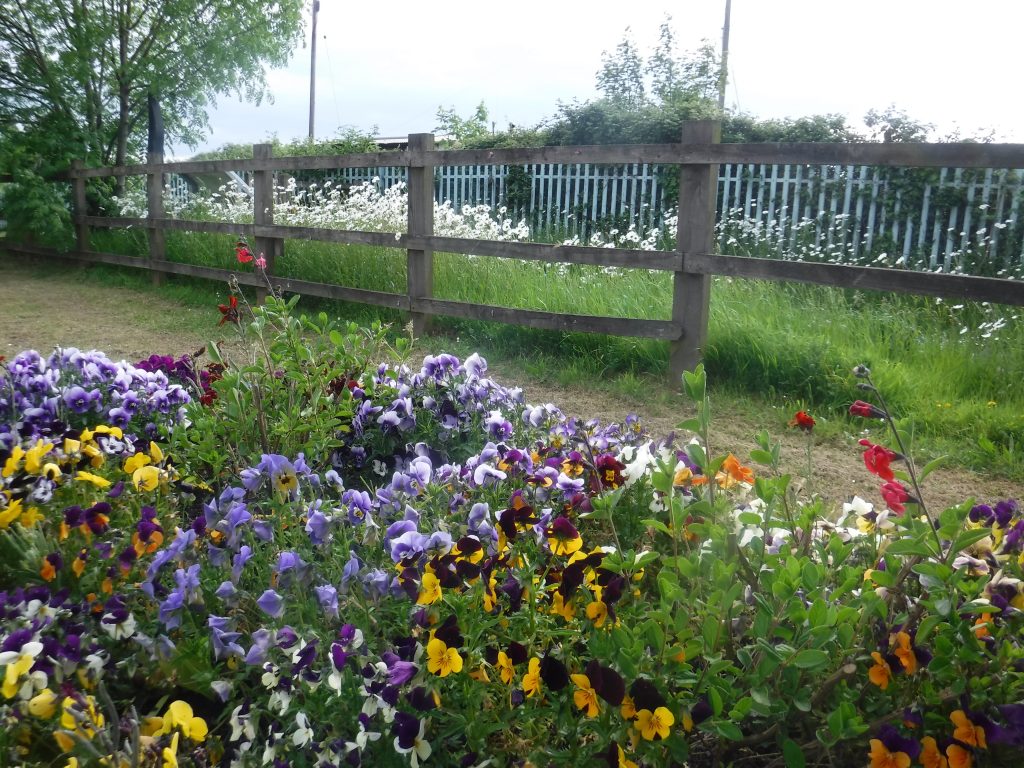 George Bearman (sponsored by Exmouth Rotary Club) is positioned alongside the railway line in front of the Lorry park. It is one of our smallest boats. 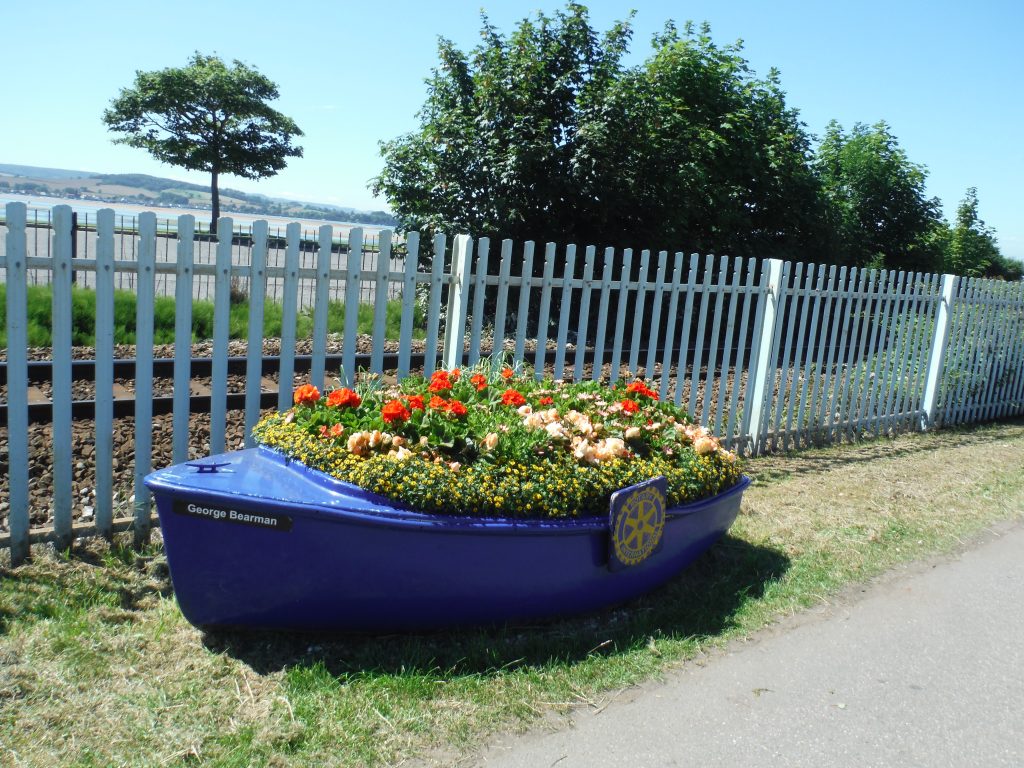 Gertrude (sponsored by Exmouth Rotary Club) comes next and she is one of our largest boats. She is currently unplanted as Oxalis has found its way into the boat and  taken hold in this last year. 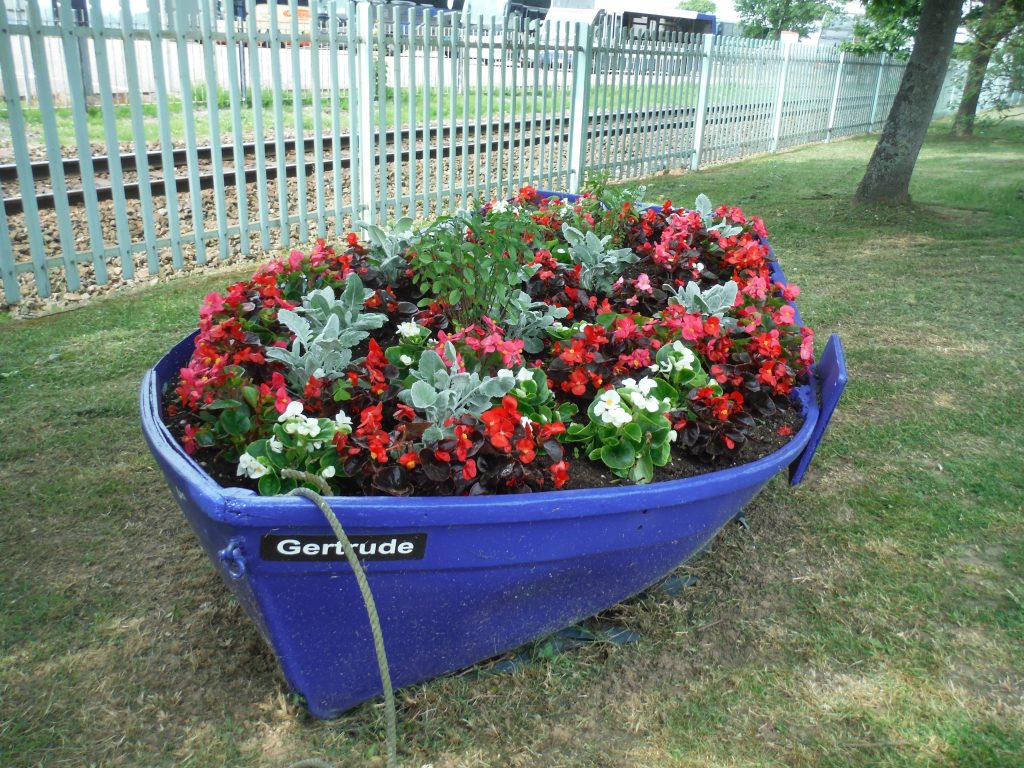 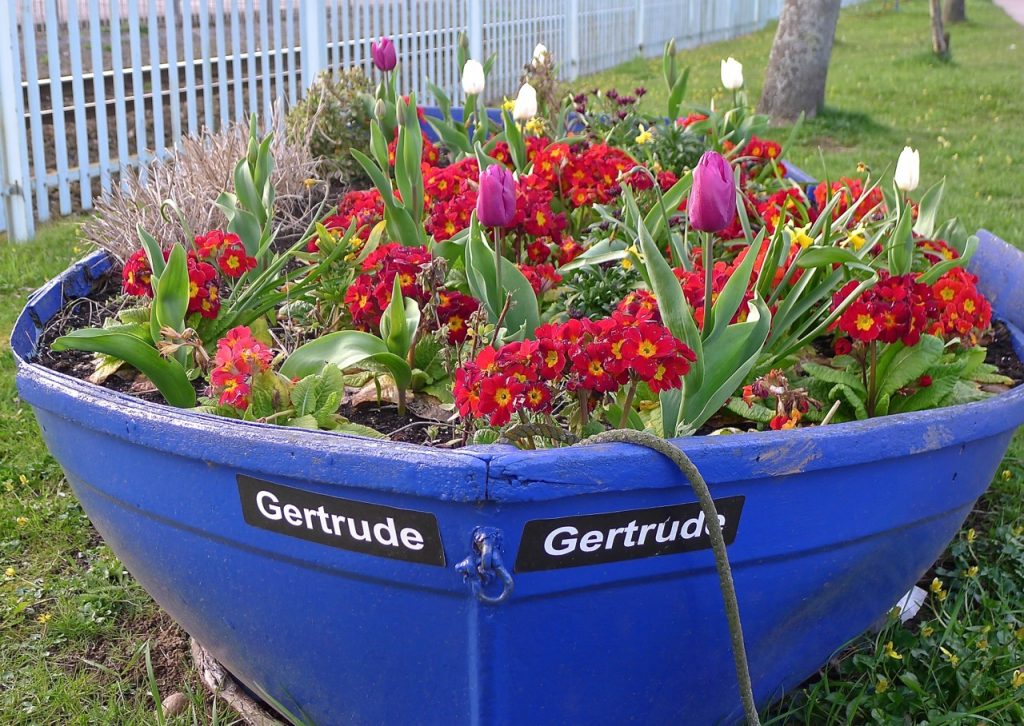 Pat Graham MBE (Sponsored by AJs Taxis), is in the Station Concourse area. She is one of our newest boats and welcomes visitors and residents to Exmouth. 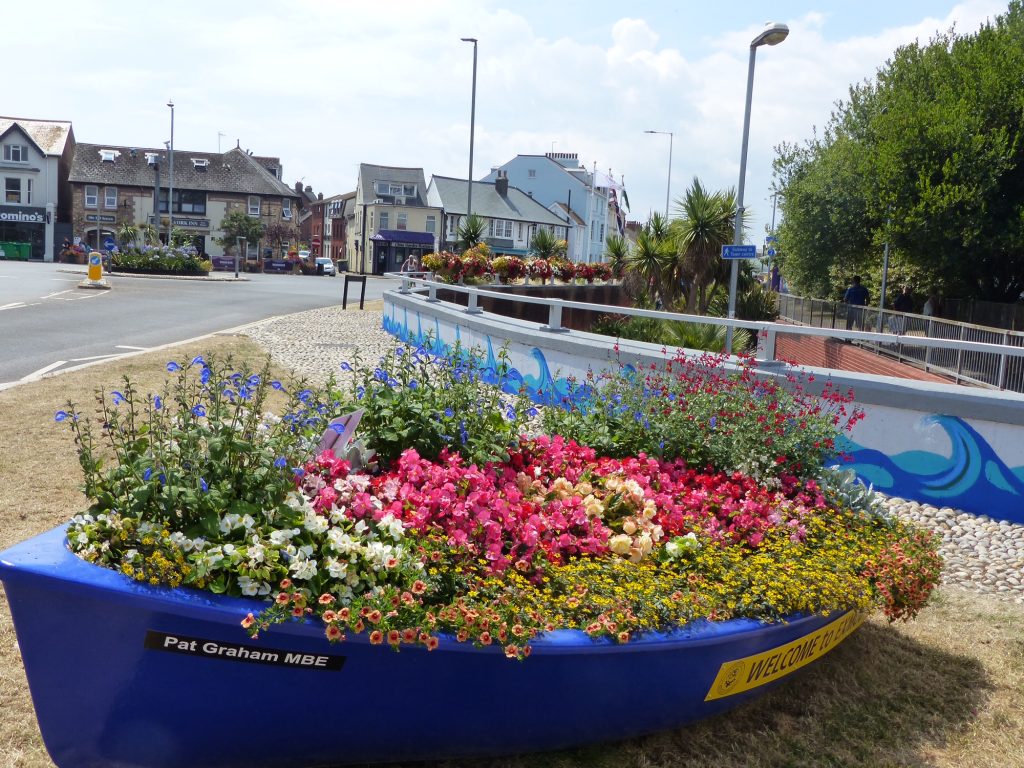 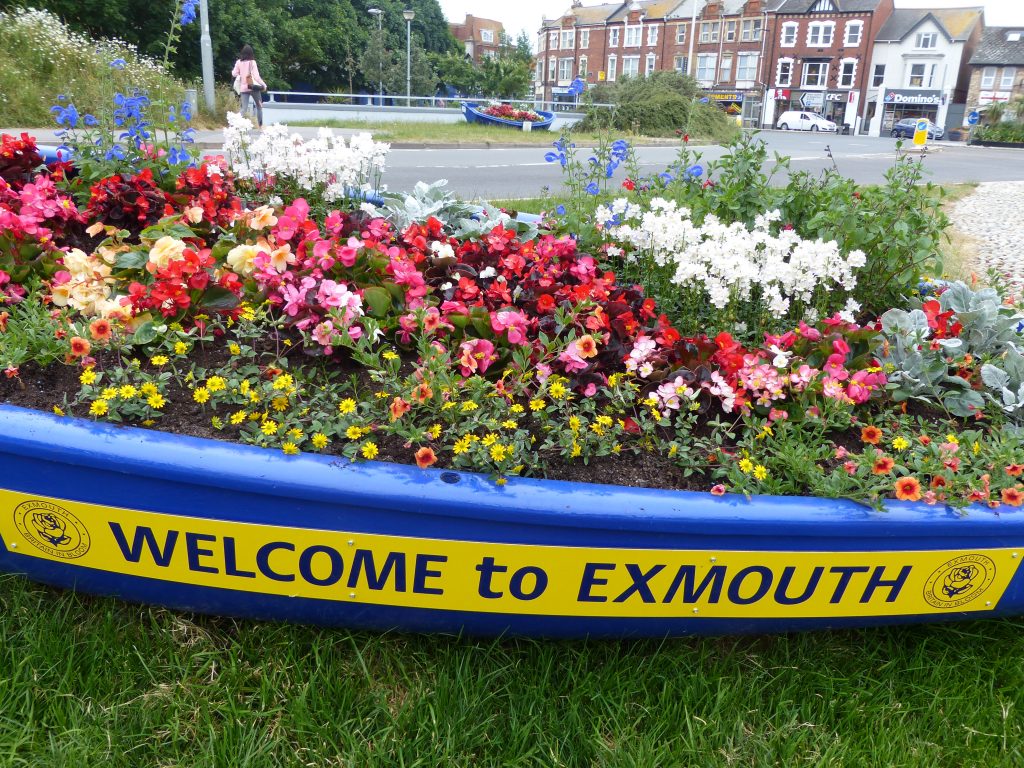 Margaret Jean (sponsored by Exmouth Rotary Club) is just across from the Station. Last year she helped to celebrate 100 years of the International Red Cross 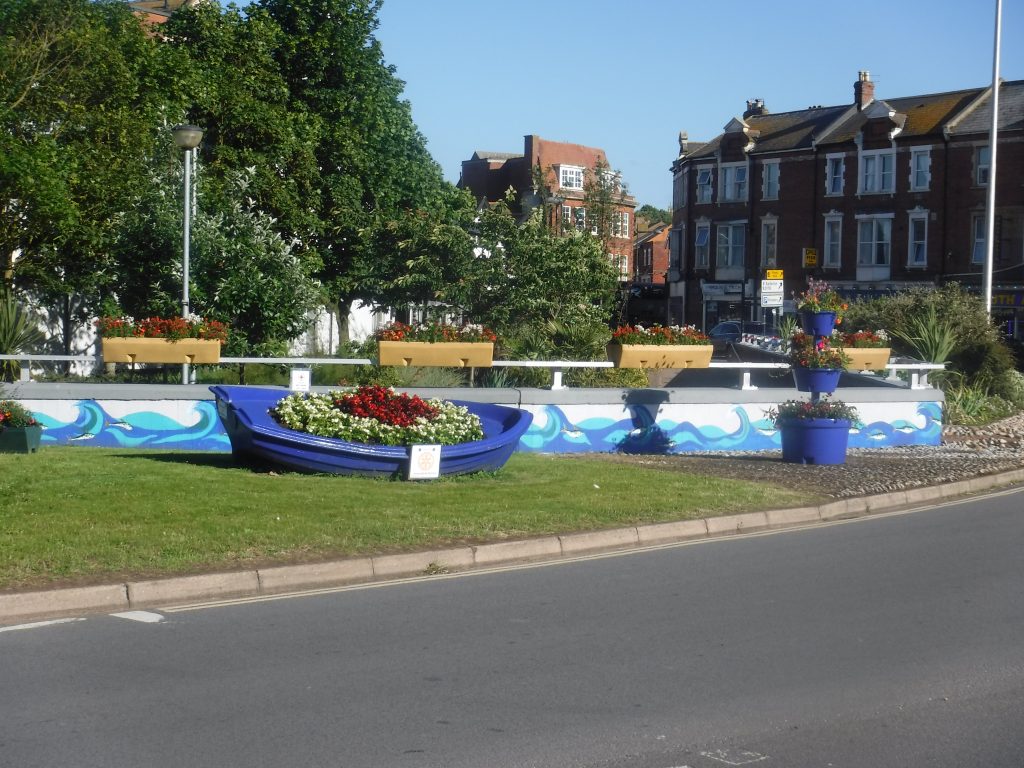 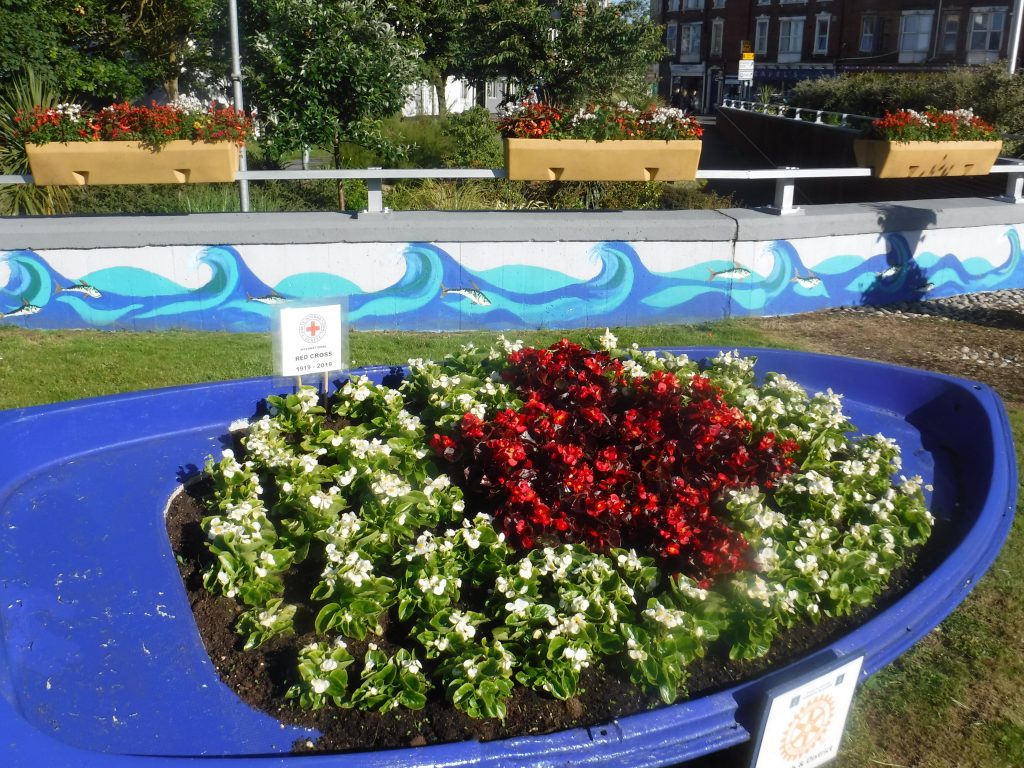 Spirit of the Exe (sponsored by Community Transport) was put into the Strand in 2018 to add some colour to the area. Children like to help to plant up this boat too. 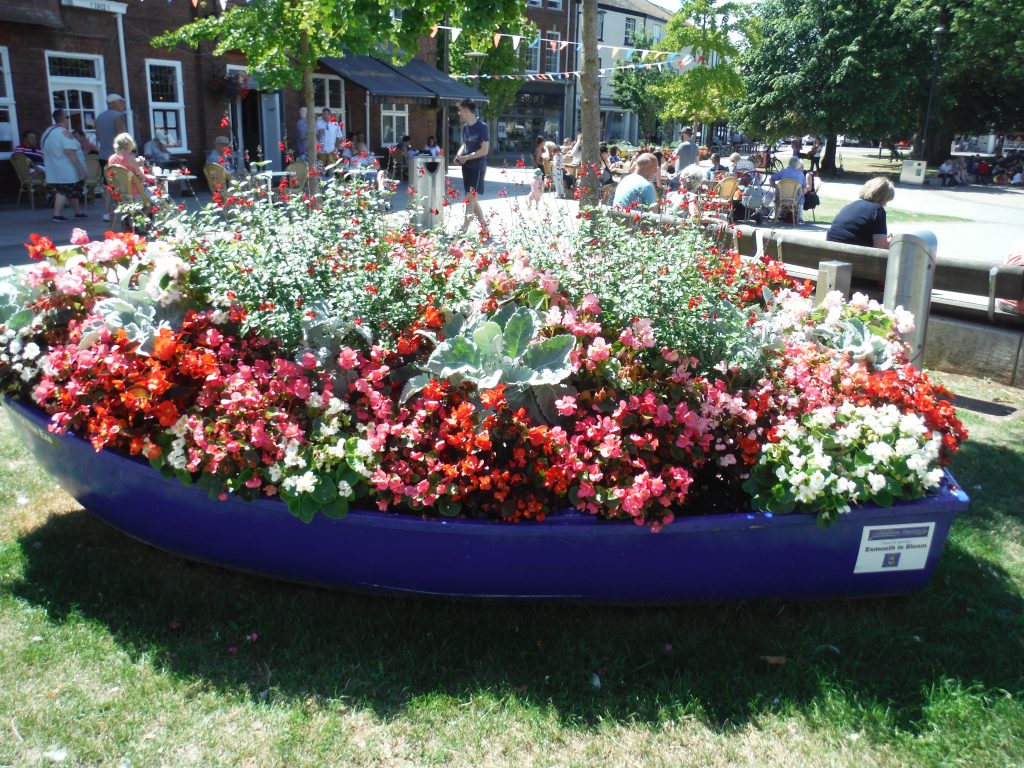 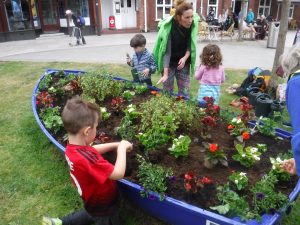 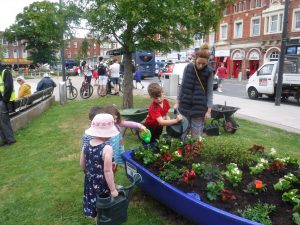 Catherine Harriet Eaton (sponsored by Exmouth Rotary Club) is our only boat on the outskirts of town but nevertheless completes our flower-filled boat family. 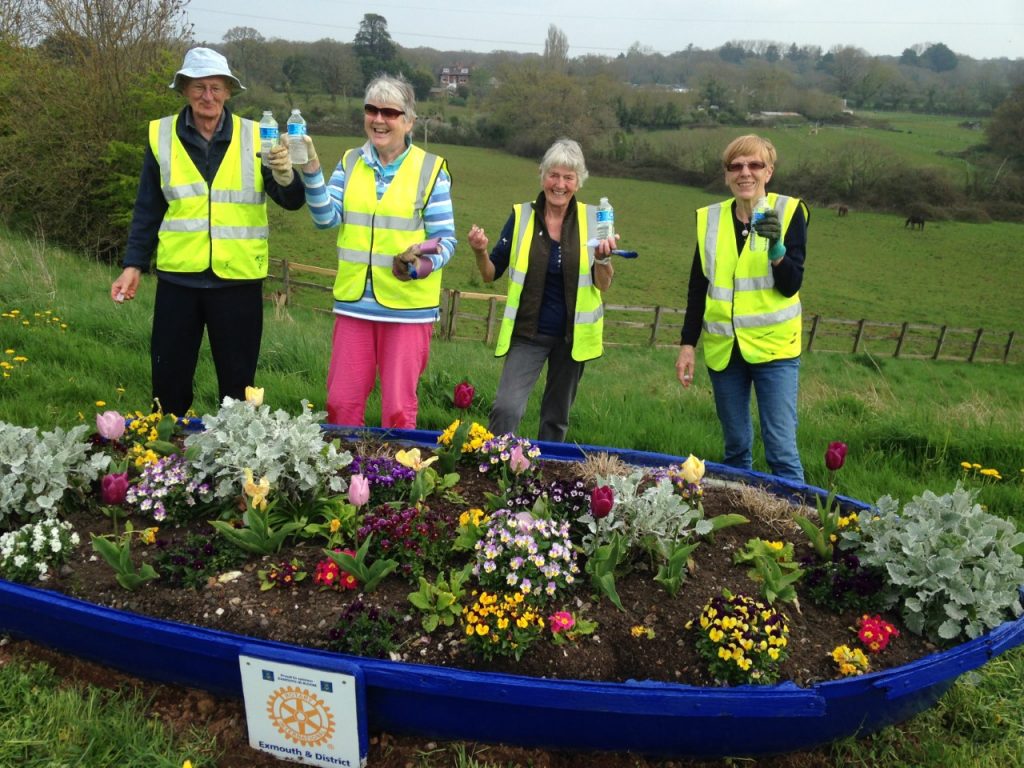 We do however also have an unnamed boat that is permanently planted with hardy perennials and gets little attention but thrives in the big Triangle bed. 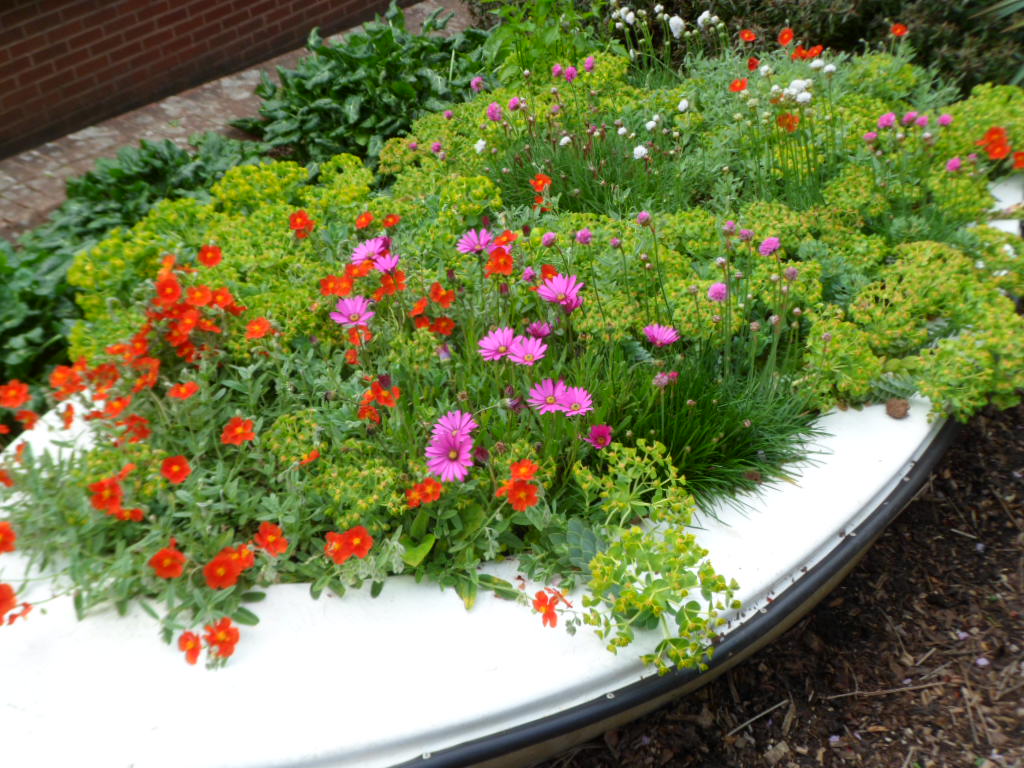 and there was one more……… Our fun Carnival entry boat in 2015 with Flora the Flowerpot lady from Brixington IYN on board as a passenger that day. The theme was ‘Keeping Exmouth Shipshape!’ and that’s what we try to do all the time of course. 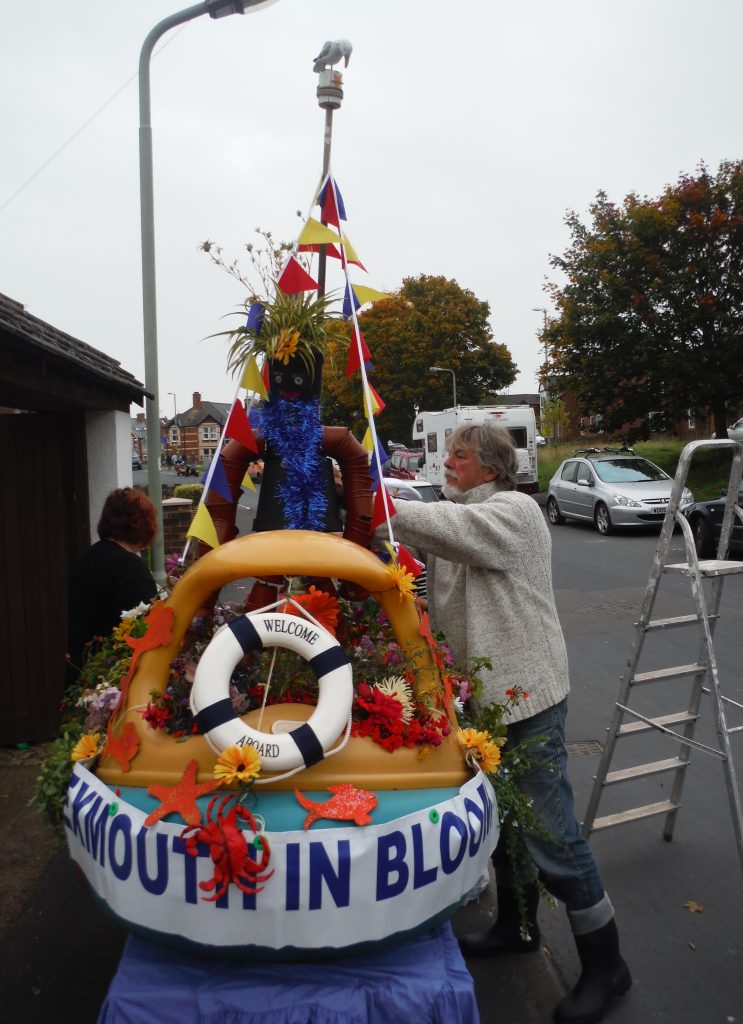 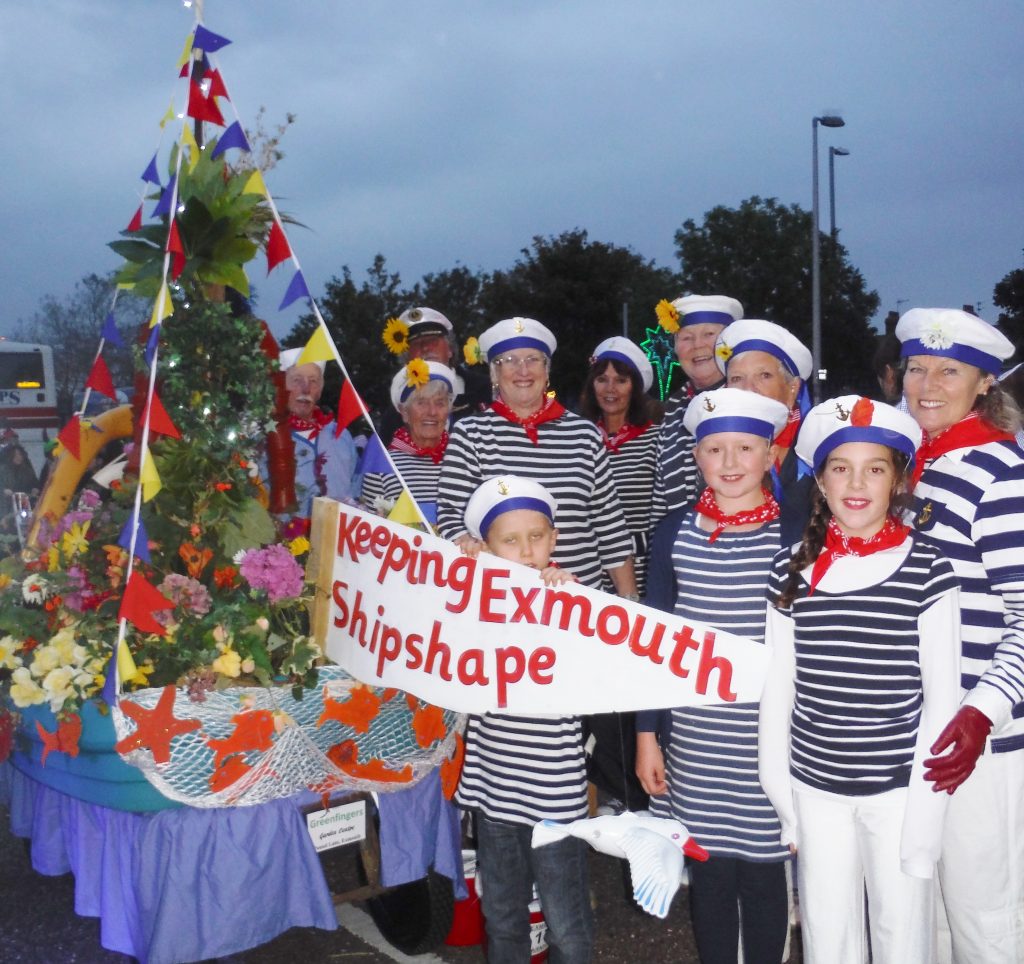