A remarkable ‘Sensory Garden’, that will help not only physically and mentally vulnerable people but also Exmouth residents and visitors, has officially been opened.

The special area, in the sunken seafront gardens next to the Pavilion, was opened on Monday 12 July 2021 by the Chairman of Devon County Council, Councillor for Exmouth and past Mayor of Exmouth, Jeff Trail.

It comes after two years of hard work, as part of a project led by Exmouth in Bloom and Exmouth Art Group.

The concept for the new garden was conceived by Gillie Newcombe, President of Exmouth Art Group, and developed with the expertise of Graham Bell, Horticultural Advisor for Exmouth in Bloom.

It was felt that there were no suitable outdoor spaces for older people and those with mental or physical health difficulties to visit and relax in.

Working with Exmouth Town Council and East Devon District Council the ideal site was identified for the project, along the seafront.

The whole garden was brought to life by wonderful volunteers from Exmouth in Bloom, as well as others who came along to assist. 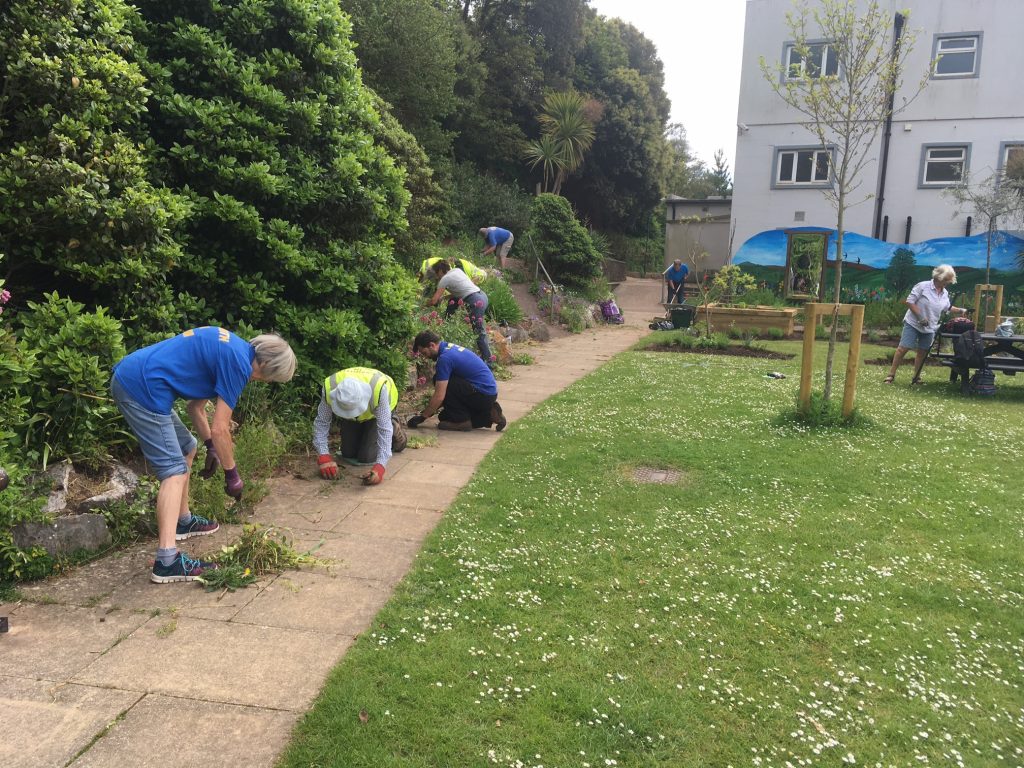 Inside the new garden, people will be delighted to see a brightly coloured and detailed countryside-themed mural featuring a range of animals and plants. 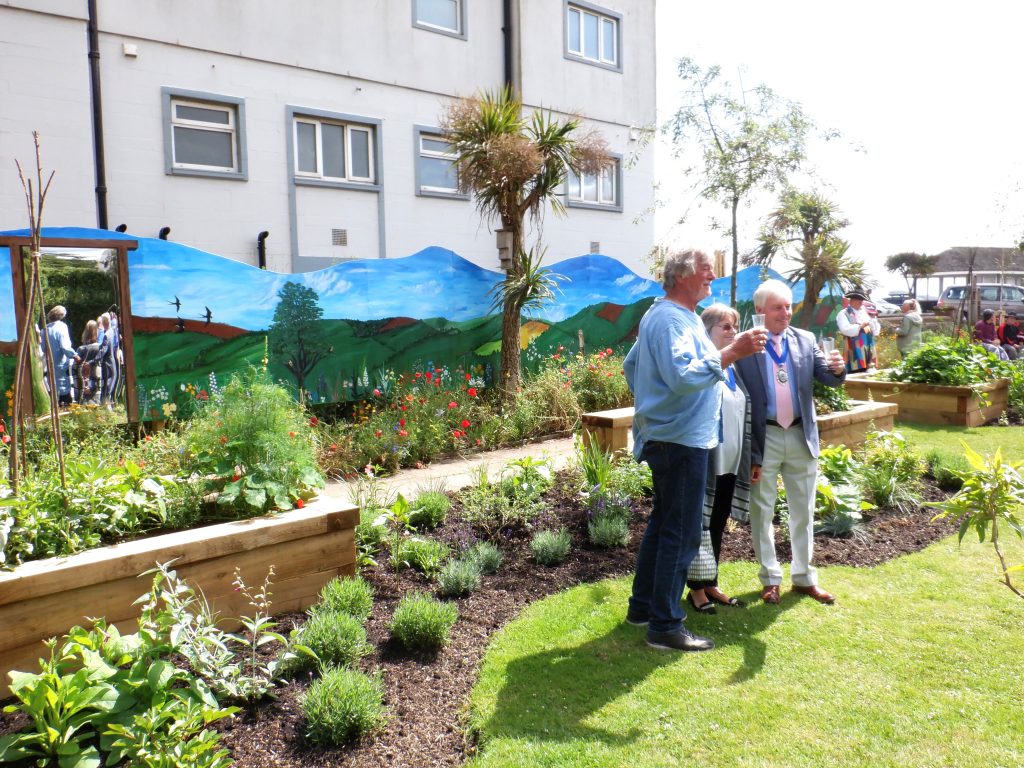 There is built-in seating areas for people to rest and contemplate their surroundings, enjoy the scents and colours around them, and feel or even taste various plants. 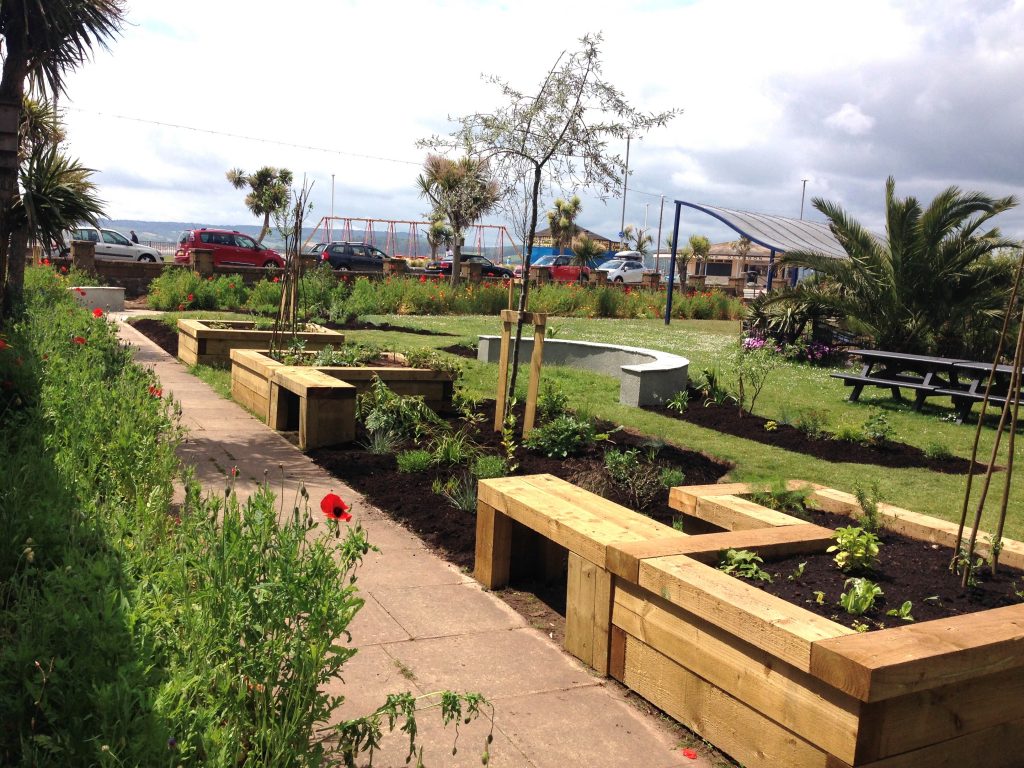 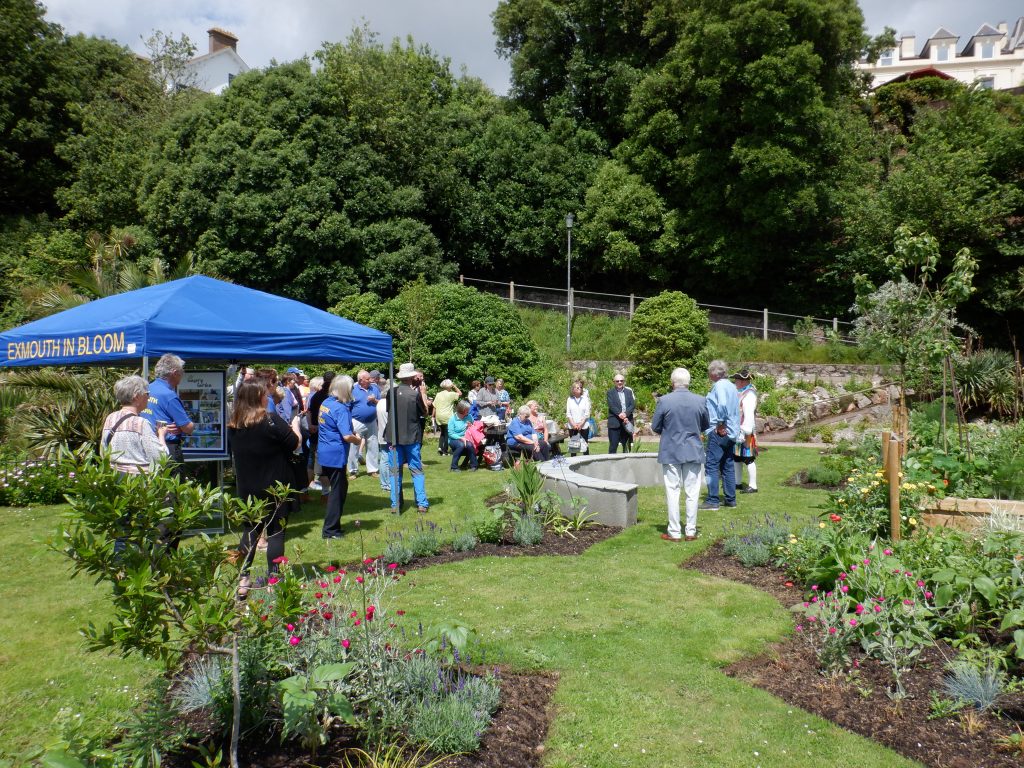 The long-term vision for the garden is that it will continue to develop, being maintained by the groups and the community, maturing within the landscape, becoming a place to meet up with friends, be a destination for calming thoughts and mindfulness, and sociable space for those who may experience loneliness.

“This area is accessible to everyone at all times of the day and looks out over the beach and views beyond.  It will keep on getting better and better.”

The project has received the support of multiple organisations including East Devon District Council, Exmouth Chamber of Commerce, Exmouth Town Council, local businesses, and the community.

Many businesses across Exmouth have been generous in donating materials or providing extra discounts or advice.  Donations of time, skills, plants and funding have been gratefully received from members of the two groups and the local community.  Special thanks go to Mike Hole for his outstanding carpentry work and Urban Earth and Mike Shoulder for their excellent groundwork.

Gillie, who has a background in Health and Social Care, spoke about being overwhelmed with the amount of support from across the town, said:

“There have been donations of all types, from small bedding plants, through to valuable mature trees and shrubs. After what has been an awful 18 months for everyone, the Sensory Garden comes at a time when so many people will appreciate it”. 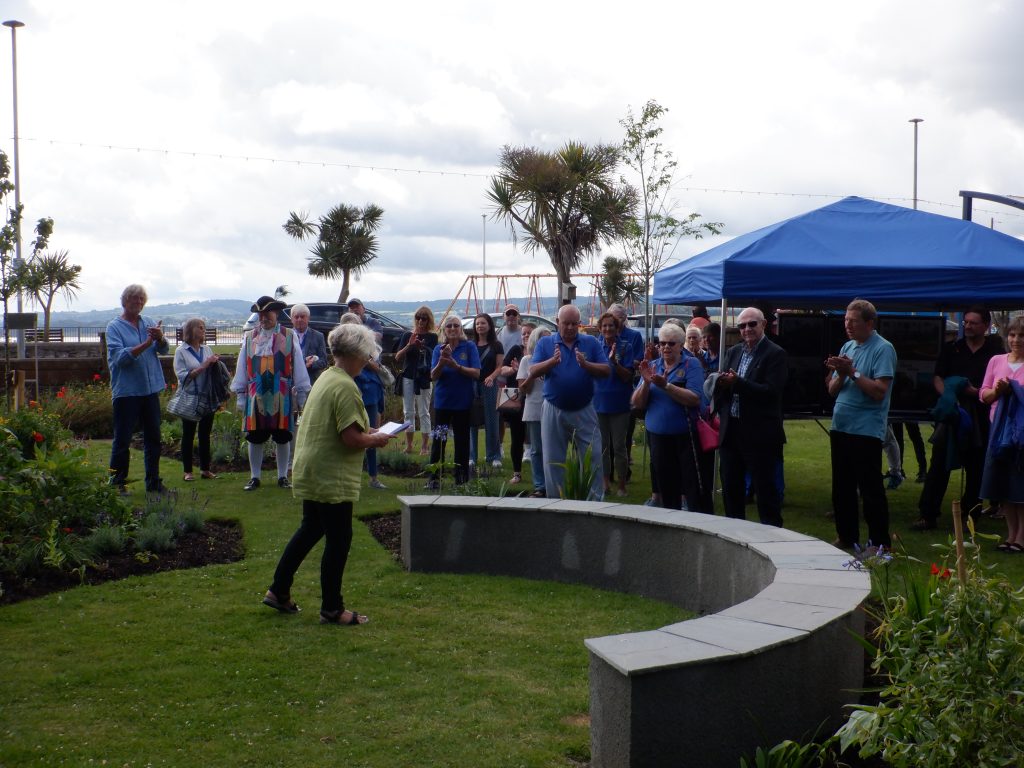 Exmouth Art Group is celebrating its 75th Anniversary and Exmouth in Bloom its 50th Anniversary this year, so we are immensely proud to be able to unveil the results of this successful project together.”

“EDDC are delighted to see the completion of this community-led project in one of the spaces that it currently manages along Exmouth Seafront.

“We would like to thank Exmouth Art Group and Exmouth in Bloom for coming to us with their proposal for the creation of the Sensory Garden, which is an excellent idea and something that the whole community can use. Working together with Streetscene, the space can continue to be looked after and developed further.” 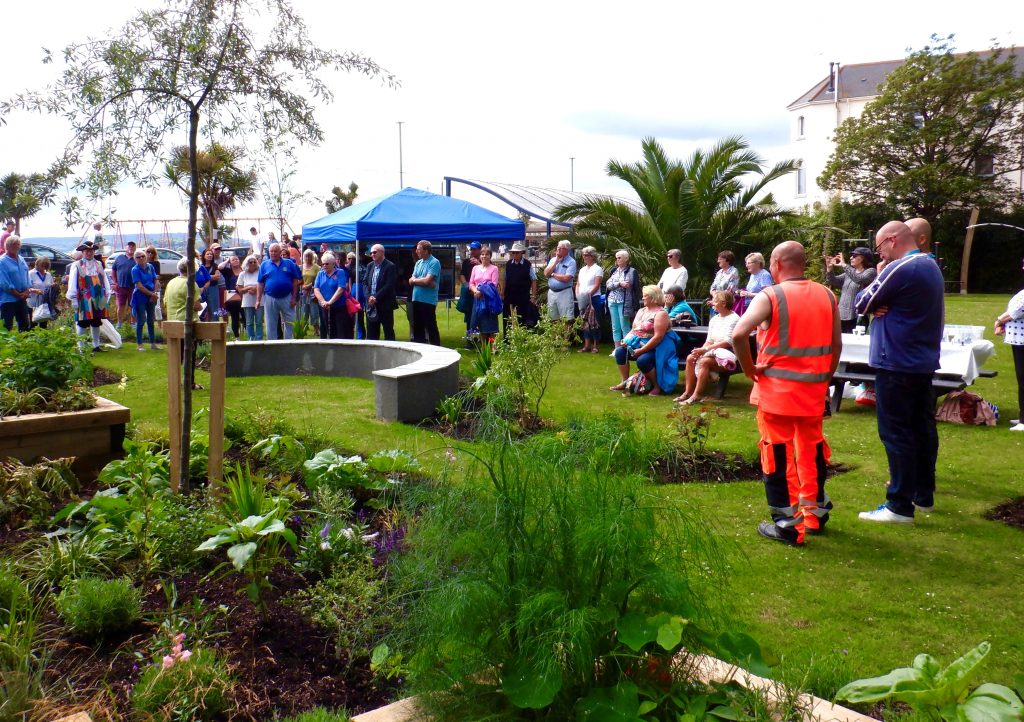 Among those attending the opening were members of Exmouth in Bloom and Exmouth Art Group and  people from the local community including those with sensory difficulties and physical disabilities. 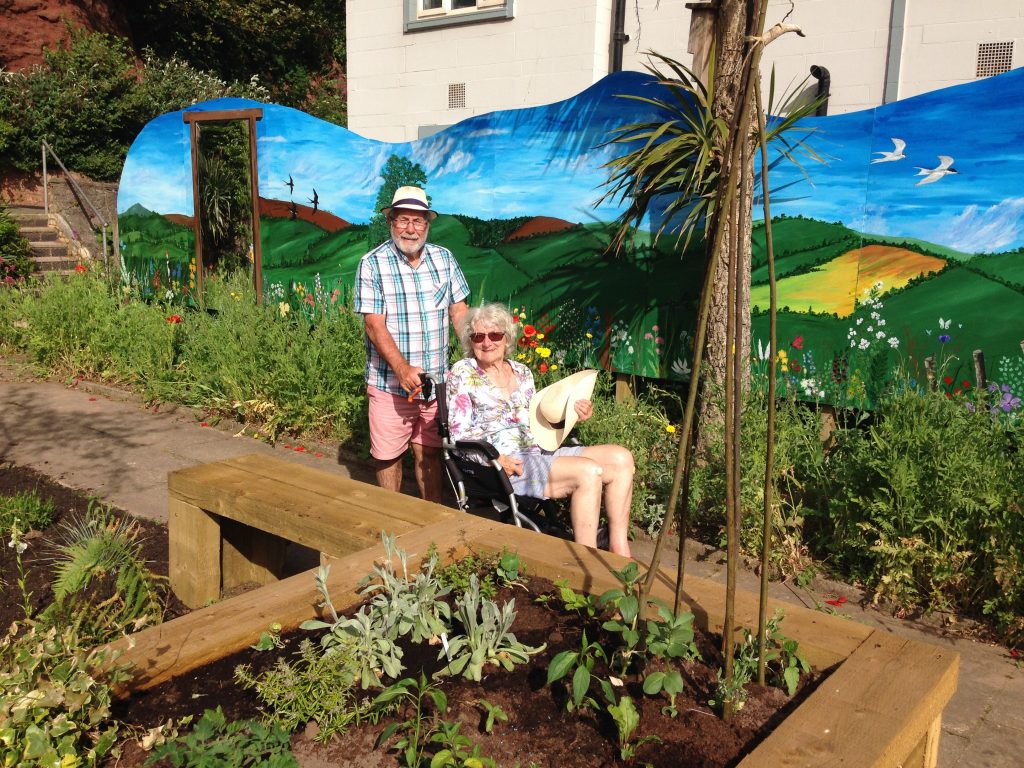